**It's time to take stock of the Yankee's biggest problem: They don't have a reliable shortstop. Gleyber Torres made an error last night that led to a run. Officially, it was his 2nd error of the year, but in my mind, it was his fourth. He's not hitting up to his potential, but he will so that's not an issue. There's no way to have him change positions without losing an excellent player and the DH slot is filled with Stanton. The only player I wouldn't mind seeing gone is Aaron Hicks, but can Torres play center? A trade, perhaps? I guess we'll have to wait to see if Cashman can work some magic.

** I read an article yesterday that had this headline: MLB umpire Angel Hernandez called out for another brutal game. A twitter account - Umpire Auditor -  claims that Hernandez missed 24 separate calls in the Houston/Los Angeles game on Tuesday. Only 24? Did they quit counting after the third inning? When is MLB going to do something about this?

**Here we go again. Aaron Judge was held out of Wednesday night's game because of "left side soreness." Manager Boone said, "It's not serious, we're just being cautious." They said he is available to pinch hit - he didn't. He will be able to play again Friday. Now they say he may not. Is this another drag-out injury where in three or four days we'll be told he actually pulled a muscle or something and he'll miss 10 days. Where are all these medical people that are supposed to keep the players on the field? Not only aren't they doing that, they can't even figure out what's wrong with them. They should just put them out there and tell them to play. As my Aunt Kay used to say if you complained about a hurt, "Oh, I don't feel a thing."

**I'm sure the Houston Astros were hoping the COVID year of reduced games and no fans in the stands, would act as a buffer for their transgressions of sign stealing, but it doesn't appear that that happened. In Monday nights game in Los Angeles against the Angels, trash bins were thrown onto the outfield grass by the fans. The Astros are also being showered by boos at every turn.  Manager Dusty Baker of the Astros is  not happy. "How many in the stands have never done anything wrong in their life? We paid the price for it. How many people have not cheated on a test or whatever at some point in time." Sorry Dusty, but it doesn't work like that. You can't just say you're sorry and let it go like that. Saying, 'Well, everybody does it.' isn't a good excuse either. You screwed around with the integrity of the game and now you're paying for it. It's certainly not up to you to determine how long this will go on. It's up to the fans and there are still 27 more stadiums you have to play in so grit your teeth and take what you deserve.

**LA County Sheriff Alex Villanueva has finally admitted that Tiger Woods car crash was caused by speeding. This took six weeks. The car missed a turn, went thru a guardrail, hit a tree, went airborne, down a bank and landed on it's side. Does that sound like something going 40 MPH?  This is not his first accident. If he dies in one of these, that's one thing. What if he kills some innocent person? They should take his license away from him.

**The Boston Red Sox have unveiled a new uniform as part of MLB's City Connect Series, a program to push for alternate designs of uniforms. Abandoning the traditional white uniform with red lettering, the new one in yellow with blue lettering. I'm not a Red Sox fan, but I think messing with one of the most iconic uniforms is asinine. See for yourself below. Said chief revenue officer Noah Garden, "It was front and center and this is why we did this deal. You take two iconic brands and you put them together and you have one and one make three." A sentence which makes about as much sense as this program. 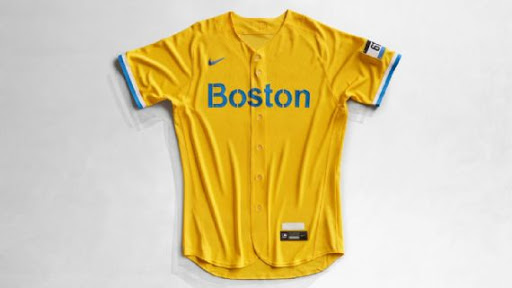 "April 8 starts the “Frozen Four” finals for the NCAA championship in men’s ice hockey. Not that most Americans, including me until last week, could name the teams involved."  -- Janice Hough

"The Rover is searching for water on Mars. They should’ve sent me there with my golf clubs. I’d have found water by my third tee shot."  -- Argus Hamilton

" Russian bodybuilder Kirill ‘Popeye’ Tereshin is facing a bunch of surgical repairs after injecting his arms with petroleum jelly to make his muscles bulge. Wouldn’t it have been much safer just to eat lots of spinach?"  -- Gary Bachman

"After his 11th-seeded team’s ugly 51-49 victory over top-seeded Michigan in the East Regional title game: “Stats are for losers … You can crumble up that stat sheet tonight."  -- UCLA coach Mike Cronin

"Eight years ago at Augusta, Tiger Woods got in trouble for an improper drop. And for once it wasn't his pants."  -- RJ Currie

"Gov. Greg Abbott has lifted all COVID-19 restrictions in the Lone Star State, meaning the Texas Rangers’ home opener might be a sellout. The rules there are now so lenient that even catcher’s masks aren’t mandatory."  -- Dwight Perry

"It should be no surprise that Baylor gunned down previously unbeaten Gonzaga 86-70 to win the NCAA Tournament. Hasn't Texas always been big on the right to arm Bears?"  -- RJ Currie

"The Spike Lee/Barkley/Jackson spots during the NCAA Tournament are dumbed down more than usual which I thought was impossible. They're geared toward viewers with the intellect of a garden rake."  -- Brad Dickson

Founder of The Chad Picasner Trio